Regent Park is a community with a rich history of political and social activism. But as the Revitalization reshapes the neighbourhood and its residents, who will remember the individuals that fought for change? As Daniels Spectrum’s first Artist-in-Residence, Syrus Marcus Ware wants to shine a light on Regent Park’s unsung activists, revolutionaries and organizers in a collaborative new project that will be presented at the cultural hub in 2017.

Syrus is no stranger to Regent Park, having worked in the community throughout the last decade in his role as Coordinator of the Art Gallery of Ontario’s Youth Program. As a multidisciplinary artist and curator, his work explores social justice frameworks and activist culture with a particular focus on issues surrounding gender, sexuality, disability and race. Syrus himself is a celebrated activist; in 2005, he was voted “Best Queer Activist” by Now Magazine, and in 2012 he was awarded the Steinert & Ferreiro Award, Canada’s premiere recognition of leadership in the LGBTQ community.

The new Artist-in-Residence Program at Daniels Spectrum is an opportunity for the selected artist to develop their own artistic practice while exploring the neighbourhood, meeting with community members and collaborating with the building’s tenant organizations, culminating in the creation of a new work that will be publicly presented at Daniels Spectrum. Though his year-long residency is only just beginning, Syrus has a few ideas about how several of his ongoing projects might be influenced by the people of Regent Park.

In his Activist Portraits series, Syrus creates larger-than-life portraits of the activists who inspire him as a way to commemorate and monumentalize lives that are often lived on the margins. The creation of these intimate freehand portraits is a durational performance, completed in a single session that spans 2-3 days. Syrus listens to interviews with his subjects as he draws, falling into a deeply emotional trance-like state. “I feel very in love with these people I’ve drawn. I’ve spent so much time with them,” he explains.

The Activist Love Letters project was started in 2012, inspired by the powerful letters activists and organizers have sent to each other throughout history. This ongoing piece has been performed countless times across the country, with Syrus reciting letters from activist to activist, both famous and obscure; words of support and encouragement, rage and caution. The audience is invited to write their own letters to the activists they admire or to choose one from a wall of bios that Syrus has collected in his research. Conceivably, someone from Regent Park could end up as the subject of one of these love letters.

A major theme throughout Syrus’ works is the idea of the archive as sustenance—a collection of knowledge to guide us through a looming revolutionary or apocalyptic moment. His portraits and letters projects document the efforts of large and small-scale activists in order to inspire future leaders and changemakers. “Because everything is online, it makes it seem like everything is online. But everything isn’t online; it’s been curated,” Syrus observes. “If you were a young person trying to start a movement, you could look and see what’s happened before. But you’re not going to be able to find it online. It’s in other humans.”

For more information about Syrus Marcus Ware, visit www.syrusmarcusware.com or follow him on Twitter at @syrusmarcusware. If you know an activist that has been doing incredible work in the Regent Park community, Syrus wants to hear from you. Send to activistloveletters@gmail.com. 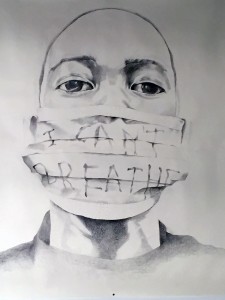 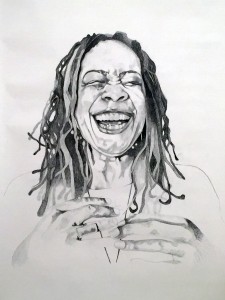 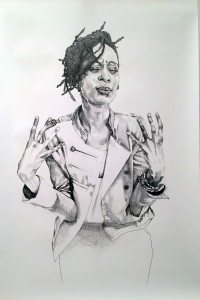 Syrus is a visual artist, activist, curator and educator. He is the Coordinator of the Art Gallery of Ontario Youth Program. As a visual artist, Syrus uses painting, installation and performance to explore social justice frameworks and activist culture. His work has been shown widely, including at the University of Lethbridge Art Gallery, Art Gallery of York University, The Art Gallery of Windsor and The Gladstone Hotel. Syrus’ recent curatorial projects include The Church Street Mural Project (Church-Wellesley Village, 2013), That’s So Gay: Come Together (Gladstone Hotel, 2016) and Re:Purpose (Robert McLaughlin Gallery, 2014).

He is part of the PDA (Performance Disability Art) Collective and co-programmed Crip Your World: An Intergalactic Queer/POC Sick and Disabled Extravaganza as part of Mayworks 2014. Syrus is part of Blackness Yes! and produces Blockorama at Pride and other related events throughout the year. For the past 17 years, Syrus hosted the weekly radio segment, “Resistance on the Sound Dial” on CIUT 89.5FM. Syrus was voted “Best Queer Activist” by NOW Magazine (2005) and was awarded the Steinert and Ferreiro Award for LGBT community leadership and activism (2012).

In 2009, Syrus coedited the Journal of Museum Education issue Building Diversity in Museums with Gillian McIntyre. Syrus’ writings on trans health, disability studies and activism are part of curricula at City University of New York, York, and Ryerson. Syrus holds degrees in Art History, Visual Studies and a Masters in Sociology and Equity Studies, University of Toronto. Syrus is a Vanier Scholar and a Sylff Fellow, and a PhD Candidate in the Faculty of Environmental Studies at York University.

As restrictions by the province and city slowly lift, Artscape is happy to announce that we are planning a safe and gradual reopening of our operations! Starting July 6, Daniels Spectrum will begin providing access to tenants, guests, and camp programming. Public access remains restricted at this time.

Here is a detailed list of safety measures in place to protect the health and safety of our community, as well as our Artscape Reopening FAQ.

Thank you for your patience, we can’t wait to see you back at Daniels Spectrum!