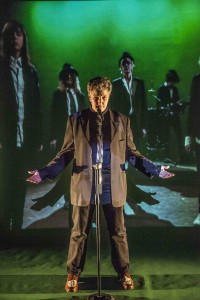 Peggy Shaw had a stroke in January 2011. Rather than lament the ideas that disappeared into the dark holes left behind by the stroke Peggy decided to celebrate the fact that her brain was able to fill those holes with new images and insights by creating the performance Ruff.

Borrowing freely from the concept of a green screen process in which a person is filmed against a background consisting of a single color usually green and then the green is replaced by an alternate video placing them in an all together different location, Peggy and her collaborator and co writer and director, Lois Weaver will present Green Screening as a combination artist talk and participatory workshop.  They will share some of the materials used in the process of making the performance, reflect on the experiences of both healing and creating and engage the audience in some performance methods to explore their own issues of memory and the power of the imagination in the face of extreme circumstance.