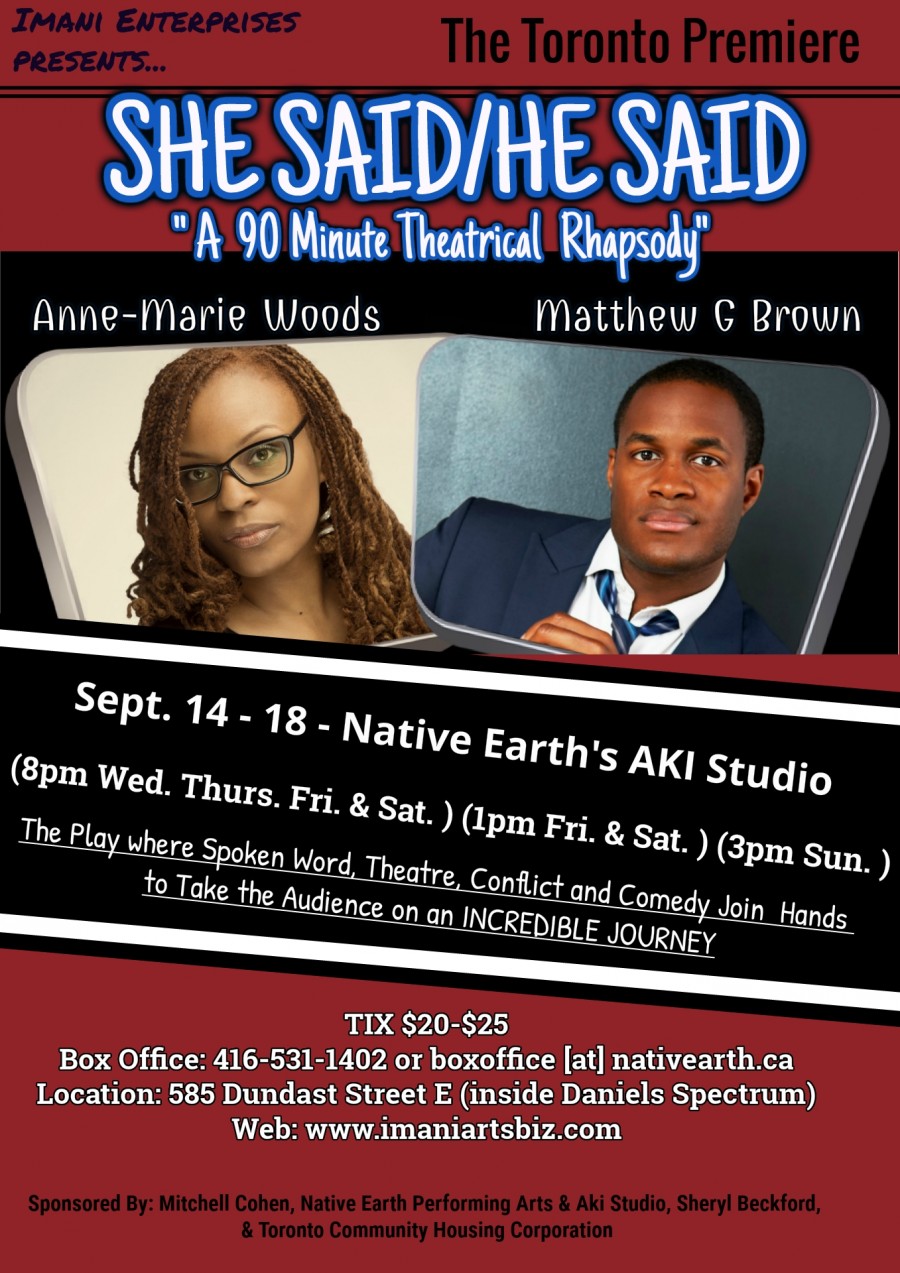 After a successful World Premiere in Montreal and a good old down home Nova Scotia Debut in Halifax, it’s time to bring this show home to the place that is responsible for the storyline!!! Last stop on the 3 city tour is Toronto, Ontario…

SHE SAID/HE SAID is a play where spoken word, theatre comedy and conflict join hands to take the audience on an incredible journey.

SHE moved to Toronto from Nova Scotia has lived there for 5 years and after trying online dating and joining meet up groups she still hasn’t met anyone.

HE was in a long term relationship, had a custody battle to see his daughter and is finally ready to meet someone.

Together, they fight to make their relationship last in a world where “the rules” are always changing.

A fusion of real experiences and fiction, playwright Anne-Marie Woods conveys in this new work the vulnerability felt in romantic relationships and the importance of communication.

Through compelling monologues, poetry and song, the female/male rapport is laid bare in this tragicomic battle of wits. SHE SAID/HE SAID is a fresh and nuanced look at relationships through a script that cleverly meanders through the present and past experiences of its two main characters. Where time is subjective, the fourth wall is intermittently torn down and location though specific is universal.

Woods has taken a non-conventional approach to telling a modern day love story.

Winner of the 2013 Harry Jerome Award for Excellence in Entertainment, she presented highly successful public readings of this new creation in 2014 to audiences in Nova Scotia, Toronto, and Montreal. The fiery feminist poet and playwright’s work has been performed in the UK, Trinidad, the United States and in Canada.

She Said/He Said had its World Premiere at the MAI in Montreal produced by Black Theatre Workshop April 13th – May 1st of 2016 directed by Artistic Director Quincy Armorer. It then had a fantastic Nova Scotia Debut June 15th – 19th as part of the STAGES Theatre Festival at the Dunn Theatre produced by Imani Enterprises. It is a production that gives a unique perspective on the complexity of matters of the heart.

Running time is approximately 90 minutes
There is no intermission.