IN CONVERSATION WITH… ADRIAN AITCHESON OF TOO BLACK GUYS 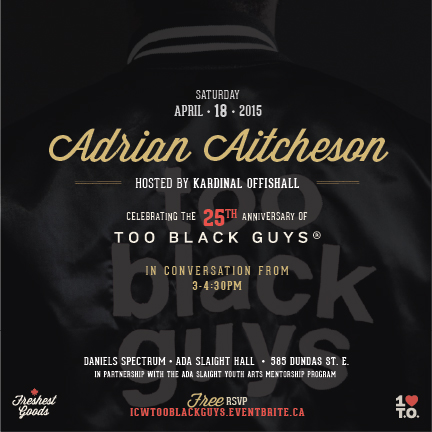 Join us for an ‘In Conversation with…’ Adrian Aitcheson on April 18th celebrating the 25th Anniversary of ‘Too Black Guys’ at Ada Slaight Hall inside Daniels Spectrum! Adrian has ventured an incredible journey in building his notable brand ‘Too Black Guys’ and the exemplary strides in his personal career. Hosted by Juno Award winning rapper Kardinal Offishall we aim to give you an insight of what has made Adrian so successful and some of the hardships of being an entrepreneur.

To give you a bit of background for those who are not very familiar. In the year 1990, starting out as a clothing line and a store founded in downtown Toronto ‘Too Black Guys’ was known for their thought-provoking t-shirts surrounding the ideologies and history of black culture. ‘Too Black Guys’ have been seen on the backs of some of the most prominent figures in hip hop like Mos Def, Spike Lee, Redman, and Mary J Blige. In 25 years Adrian and ‘Too Black Guys’ have become icons when it came to paving the way in Canadian streetwear fashion.

Attendance is free with Eventbrite Registration