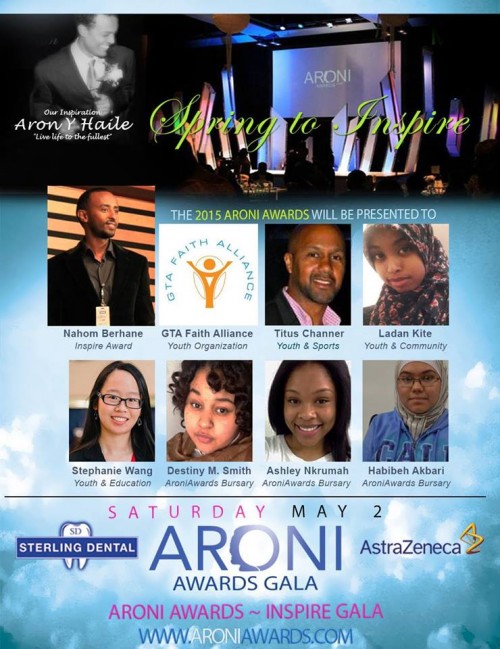 Join SterlingDental.com & AstraZeneca Canada and Harmony Movement at the 9th Annual AroniAwards Gala on Saturday May 2 2015. Be inspired as we celebrate the recipients of the AroniIMAGE Awards and the AroniAWARDS Education Bursaries.

The AroniAwards Gala launched in 2006 is named after Aron Haile, and honours those individuals who have contributed positively to the community, and ‘inspire’ others to reach for the stars.

The Aroni Awards Gala was created in honor of Aron Y. Haile as he was exemplary in creating opportunities for people in diverse backgrounds. Aron Y. Haile, an African Canadian who died in 2003, at the young age of 30, was an accomplished student, entrepreneur, software developer, event planner, theater arts enthusiast and adventurer. His willingness to mentor gave him an avenue to forge many meaningful relations while giving back to his community. Aron believed that you should help those with good character who are applying positive effort to further advance themselves forward despite the obstacles. In December, 2003 while on holidays from his role as a software developer at BMO, his short yet fulfilled life ended in a vehicular accident in Eritrea (East Africa.).