You are invited to experience Black History Month at Daniels Spectrum with a group art exhibition that explores past, present and future narratives of black consciousness in the African Diaspora through painting, photography, graphic arts, sculptures, audio and video works in the Hallway Galleries produced for Black History Month by Interim Curator Ashley McKenzie-Barnes. We’re excited to present the show Through Generations for the month of February, featuring five local contemporary artists: Ato Seitu, Ella Cooper, Georgia Fullerton, Komi Olaf, and Mark “Kurupt” Stoddart. It also includes a collaborative display by the ZimArt’s Rice Lake Gallery and Zimbuktu Sculptures – Public Art Consultants and a special installation brought to you by the Art Gallery of Ontario.

A Jean-Michel Basquiat interactive installation, brought to you by the Art Gallery of Ontario and Daniels Spectrum.  One of the most acclaimed artists of our time, Basquiat was born in Brooklyn New York in 1960 to a Haitian father and mother of Puerto Rican descent.

Explore his art.  Create your own Basquiat inspired art card and become part of a city-wide art project – Now’s the Time for Basquiat.

A Jean-Michel Basquiat interactive installation, brought to you by the Art Gallery of Ontario and Daniels Spectrum.  One of the most acclaimed artists of our time, Basquiat was born in Brooklyn New York in 1960 to a Haitian father and mother of Puerto Rican descent.

Explore his art.  Create your own Basquiat inspired art card and become part of a city-wide art project – Now’s the Time for Basquiat.

On first glance, Benjamin Jovero’s sketches appear to be an ode to celebrity – deftly capturing the features and expressions of stars such as John Lennon and Bob Marley, but as I wandered through the gallery considering his selection of subjects, a theme became apparent. Each person portrayed in Jovero’s work has spoken out against poverty or for the environment, or has shown support for the arts or the LGBTQ community. These are Jovero’s “seraphs”.

Despite what many would consider a life of hardship, Jovero’s message could only be described as one of hope. He finds his inspiration from those who make a difference, who lend their voice and their celebrity to help the many causes that are dear to his heart. They aren’t all famous in the traditional sense, but to Jovero they are all stars. Among the portrayals of Jovero’s “angels of the highest order,” you’ll see Bono alongside the leaders at the Christian Resource Centre (CRC) and David Suzuki along with past resident of the Toronto Arts Council, Karen Tisch. 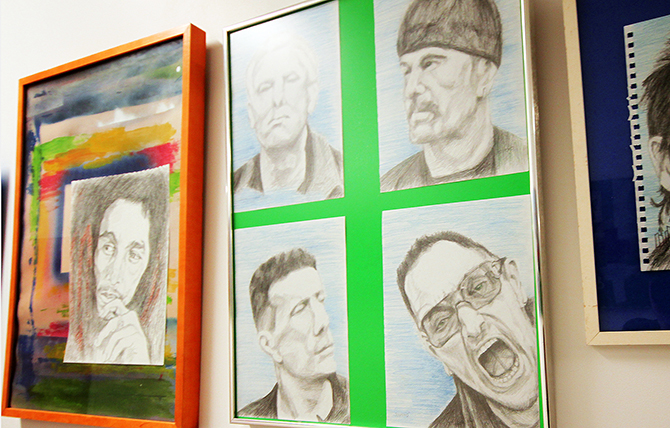 Jovero touched down in Toronto in 2008 after a decade in New York City and a life-time away from his roots in the Philippines. He found his home in Regent Park getting by as a janitor and later finding a home at 40 Oaks, an innovative affordable housing project of the CRC.

His custodial work provides materials and sometimes inspiration for his art. The second part of his exhibition is a kaleidoscope of colours and juxtaposed images on canvases of reclaimed particle board from the backs of disposed office furniture. The paintings, which represent his feelings about his background in the revolutionary movement in the Philippines, depict shadows of guns overlaid with Jovero’s symbols of peace, the emblems of the Red Cross, maple leaves and the oak leaf of the CRC.

He certainly has embraced his new identity as a Canadian. He speaks passionately about his local heroes and as I peruse the raw artwork he plays me ethereal Aboriginal music on a hand-made flute. 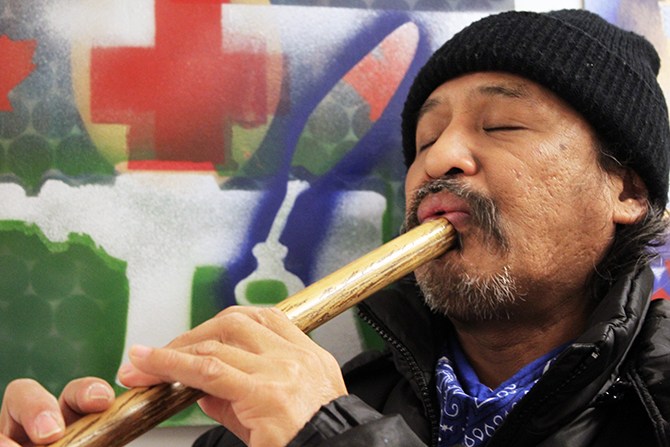 When asked what his hopes are for this exhibition, Jovero says he would love for those depicted to come and see their own portraits. “They help (the arts and community), that’s the bottom line,” he says, “and for that I salute them.”

This is Jovero’s first exhibition. It will be free and open to the public at Daniels Spectrum in the 2nd floor Hallway Galleries from Dec. 15 – Jan 25.

Visit danielsspectrum.ca/hallway-galleries for hours and to learn about other upcoming exhibitions 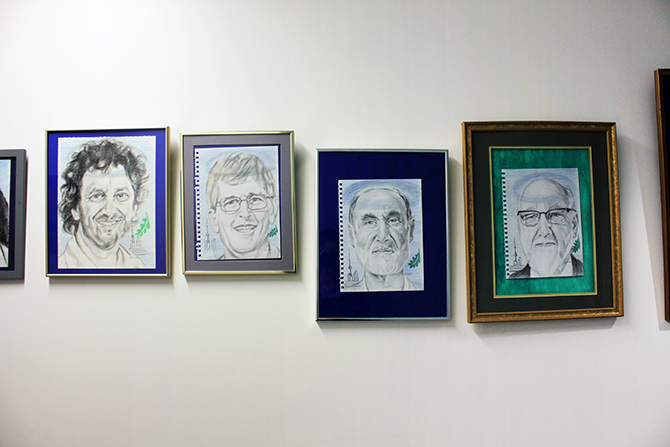 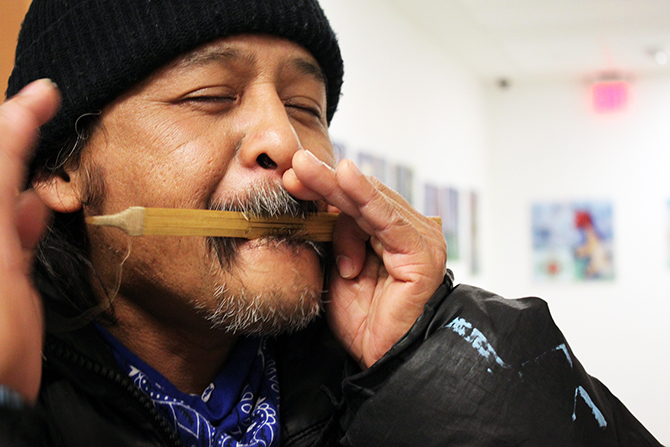 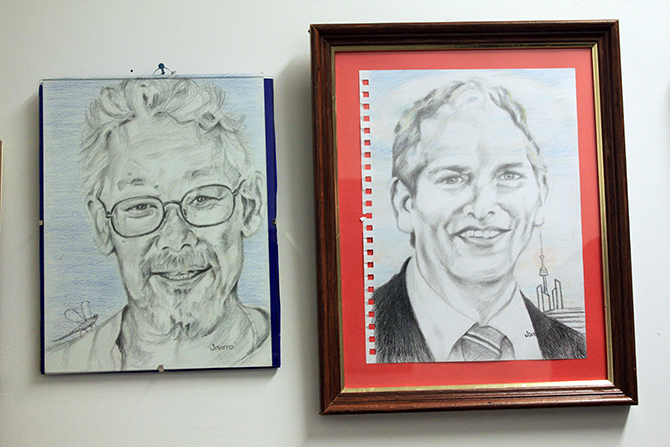 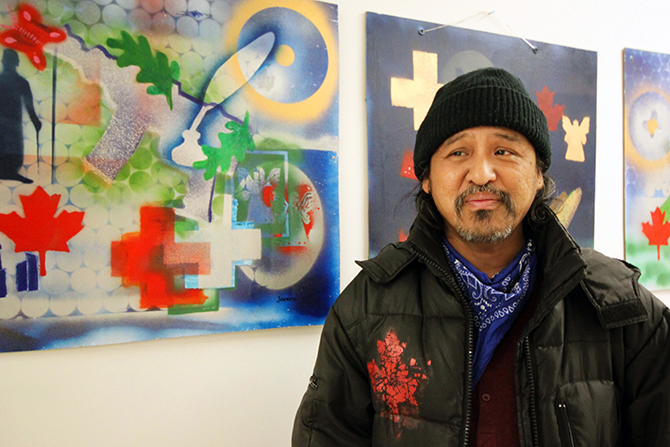 Daniels Spectrum is hosting a new photography exhibition that examines life in historic Cabbagetown one hundred years ago.
The exhibitions are open to the public daily (Mon–Fri 8 am – 9pm, Sat–Sun 10am – 6pm) from November 29 – January 26, 2015.

Presented by the Cabbagetown Regent Park Museum (CRPM), the exhibition explores two-square blocks in what is now Regent Park that provided residents the opportunity to work, attend school, shop, explore nature and prosper.

By investigating the lives of real people who lived in the original Cabbagetown, Close to Home identifies lessons for creating a more sustainable, humane, and livable urban future,” said Sally Gibson, curator of the exhibition.

The CRPM will supplement the exhibition with fascinating artifacts and ephemera gathered from their collection. The museum has placed a priority on documenting history-in-the-making and in establishing strong partnerships with groups and organizations throughout Cabbagetown and Regent Park communities since the beginning of Regent Park’s revitalization. Close to Home, is a reflection of that partnership. It embodies the museum’s vision of “sharing our past to shape our future.”

For ten years, the Cabbagetown Regent Park Community Museum has been exploring the history of two of Toronto’s oldest neighbourhoods, presenting exhibitions both online and at venues around the city. The Museum has been collecting archival photographs, historic maps, artifacts, ephemera and oral histories that tell the stories of the people, buildings, and events that have shaped both neighbourhoods from the 1800s until today.